The Northeast Tennessee Valley Regional Industrial Development Association (NETVRIDA) covers 13 counties, 10 in Northeast Tennessee, and 3 in Southwest Virginia. The region is strategically located with access to three major Interstates: I-26, I-40 and I-81 and is within a day’s drive of 70 percent of the U.S. markets. Containing a total population of over 791,000, the area has a healthy inventory of industrial parks, sites and buildings to fit the needs of business prospects. 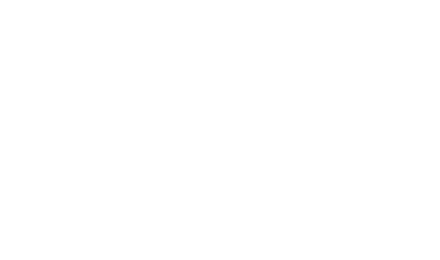 The NETVRIDA region includes the Tri-Cities TN-VA Consolidated Statistical Area centered around the cities of Johnson City, Kingsport and Bristol. Home to Eastman Chemical Company, a Fortune 500 corporate headquarters, the Tri-Cities area is internationally known for high quality products and corporate innovation. In addition to a strong manufacturing employment base, health care and education are important core sectors for the Tri-Cities.

To the west of the Tri-Cities located along the Interstate 81 corridor are Greene, Hamblen, and Jefferson Counties, combining to form a second major manufacturing center in the region. Approximately 25% of the workforce in Hamblen County is employed in manufacturing. Supported by a pro-business environment and providing considerable attention to existing industries, the NETVRIDA region has much to offer prospective companies. 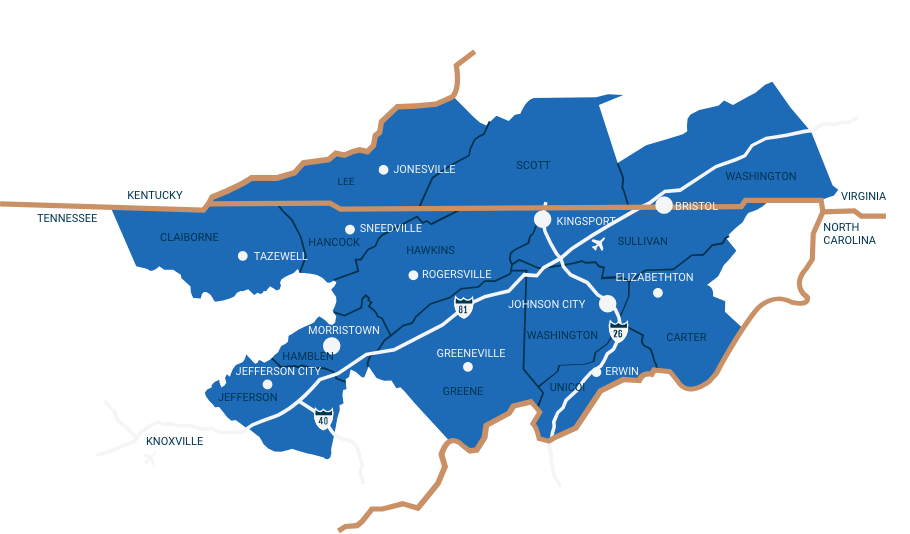 Founded in 1856 by Henry Johnson as a railroad station called “Johnson’s Depot,” Johnson City became a major rail hub for the southeast, as three railway lines crossed in the downtown area.

Now, strategically located in the economic center of Northeast Tennessee, Johnson City led the area’s population growth, retail sales, and employment over the past decades. The 2013 population for Johnson City was 65,123, making it the ninth-largest city in the state of Tennessee. It is ranked the #14 “Best Small Place for Business and Careers” in the USA by Forbes. Kiplinger ranked Johnson City #5 in “The 10 Least-Expensive Cities For Living in the U.S.A.”, stating the low cost of living is attributed to affordable homes and below-average utility, transportation and health-care costs.

East Tennessee State University (ETSU) is located in the heart of Johnson City and is home to approximately 16,500 students. It offers 112 Bachelor programs and 75 Master programs, including one of the country’s select few fully accredited graduate programs in storytelling. It also is the only university in the world with a comprehensive bluegrass music program. ETSU boasts a College of Pharmacy and the James H. Quillen College of Medicine.

Downtown Johnson City is a vibrant place with great restaurants, shopping, urban living, office space, culture, entertainment, and a unique history. Tremendous redevelopment has taken place in downtown Johnson City over the past several years, bringing new investment, activity, and growth. Superb dining can be found in downtown, with options such as German, Mexican, Southern and Italian. With over 15 locally owned restaurants, you will find a diverse cuisine for breakfast, lunch, and dinner catering to every taste and price range. 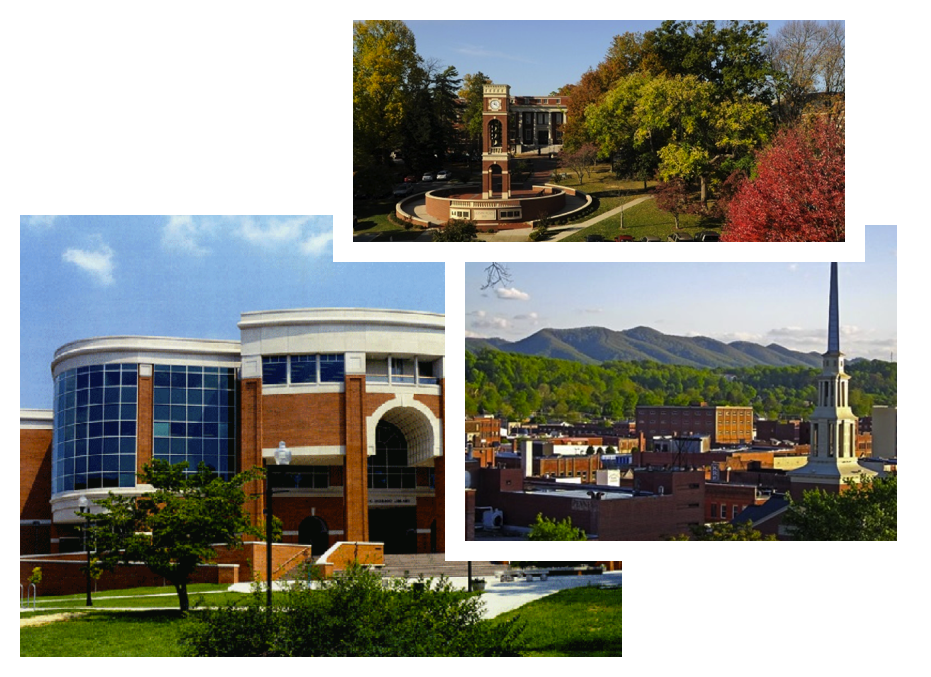 Strategically situated in the Southeastern United States, Bristol (Tennessee) and Bristol (Virginia) are twin cities located directly on the Tennessee-Virginia state line. The boundary between the two cities runs along their common downtown district. 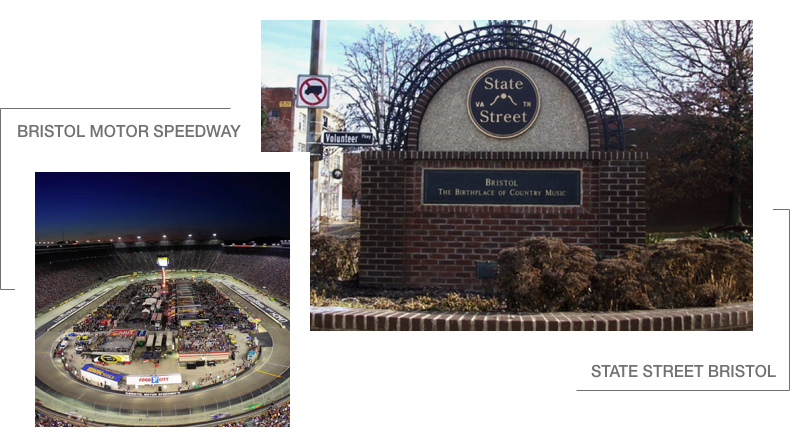 Ultra high-speed fiber optic connections in the Bristol, Tennessee service area provide some of the fastest Internet service available in the United States with speeds of ten Gigabits per second available to every business and every home in the area serviced by Bristol, Tennessee Essential Services!

Twice a year 160,000 race fans flock to Bristol Motor Speedway to enjoy the spring and summer NASCAR races. The Bristol Dragway hosts championship drag racing and is sanctioned by the National Hot Rod Association. The racetrack also hosts a “Fantasy in Lights” during Christmas.

Bristol is recognized by the Country Music Association as the birthplace of country music. The first commercially and nationally successful country music stars, Jimmie Rodgers and the Carter Family, made their first recordings in Bristol. Many organizations in the Bristol area host concerts and showcase exhibits to highlight this noteworthy aspect of the community.

Kingsport is located northwest of Johnson City and is bordering Virginia. The city of Kingsport is one of the first planned cities in the United States. It carries the nickname “The Model City” from this plan, which organized the town into areas for commerce, churches, housing and industry. Kingsport is commonly included in what is known as the Mountain Empire, which spans a portion of Southwest Virginia and the mountainous counties in Tennessee to the east. The name “Kingsport” is a simplification of “King’s Port”, originally referring to the area on the Holston River known as King’s Boat Yard, the head of navigation for the Tennessee Valley.

Kingsport is home to the Fortune 500 Eastman Chemical Company. Founded in 1920 and based in Kingsport, Tennessee, the company now has more than 40 manufacturing sites worldwide and employs approximately 15,000 people.

The NETVRIDA region not only includes Johnson City, Bristol and Kingsport but other interesting cities like Morristown, Elizabethton and Erwin. Furthermore visitors to the region are often surprised by the richness of its natural resources. Blessed with mild seasons and natural beauty, within 30 minutes from working in an urban setting one can be hiking or biking up to a mountain vista or boating on a pristine lake, such as Watauga Lake, which is entirely surrounded by the 655,598 acre Cherokee National Forest.

Roan Mountain State Park in Carter County is among the prettiest places in America – it has the world’s largest springtime rhododendron bloom along with stunning views that attract photographers from around the world. In addition, the 2,200 mile Appalachian Trail runs through the region including its highest elevation. The region’s national parks and forests provide two million acres of protected nature in the Southern Appalachian mountains and foothills. Friends and family who love the outdoors will enjoy life here! 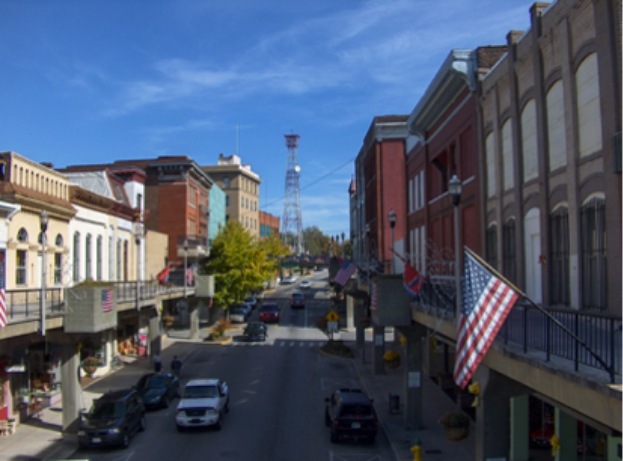 Hamblen County’s strategic location along I-81 near its junction with I-40 has made the county a strong manufacturing and distribution hub for the State of Tennessee. A number of major companies have chosen the new East Tennessee Progress Center industrial park which has vastly improved access to I-81. Walters State Community College provides customized training programs and is a major asset to Hamblen County and the region. 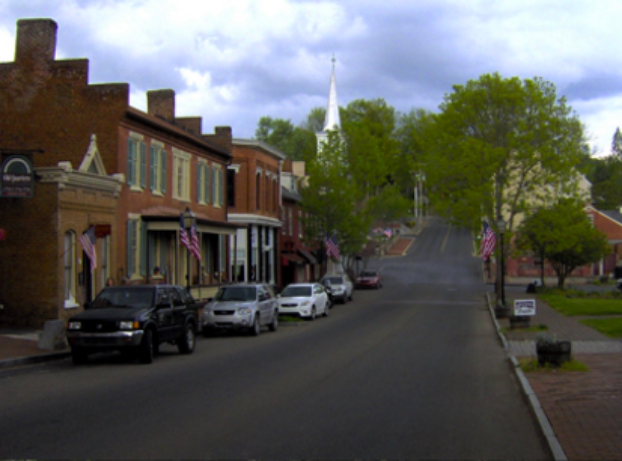 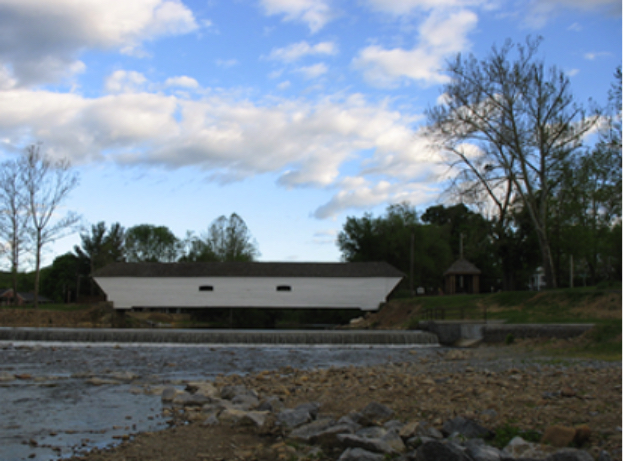 Elizabethton, founded in 1799, is the site of the first independent American settlement west of both the Eastern Continental Divide and the original thirteen British colonies in America. The Doe River flows underneath the historic Elizabethton Covered Bridge, built in 1882. The Elizabethton Historic District contains a variety of properties ranging in age from the late 1700s through the 1930s including most of Elizabethton’s downtown. 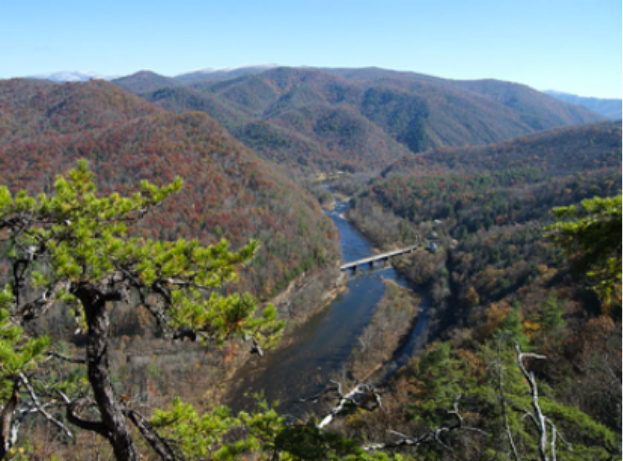 Erwin is the county seat of Unicoi County and a gateway point for the Appalachian Trail and the Rocky Fork State Park, a large nature preserve. Five I-26 interchanges are located in Unicoi County providing many opportunities for prime industrial sites as well as retail and other commercial development. Unicoi County’s industries are diverse and include large agricultural concerns, transportation logistics, mechanical and chemical production facilities and nuclear fuel production. 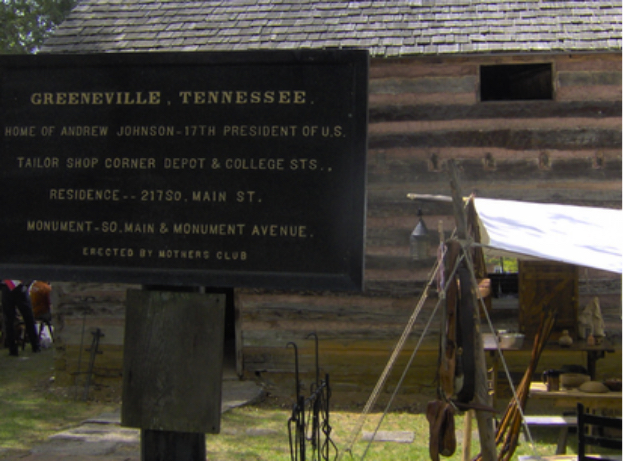 Greene County is in an upward trend in growth and development. The county’s diverse industrial base consists of many industries and a variety of products manufactured in the area. New industry locations and expansions have resulted in thousands of new jobs and more than $315 million in new capital investment, providing a major economic boost to Greene County. Greene County has a rich historical background and is the location of numerous Civil War era historic sites including the residence of President Andrew Johnson. Greene County is also home to the oldest college in Tennessee, Tusculum College, a coeducational private college. 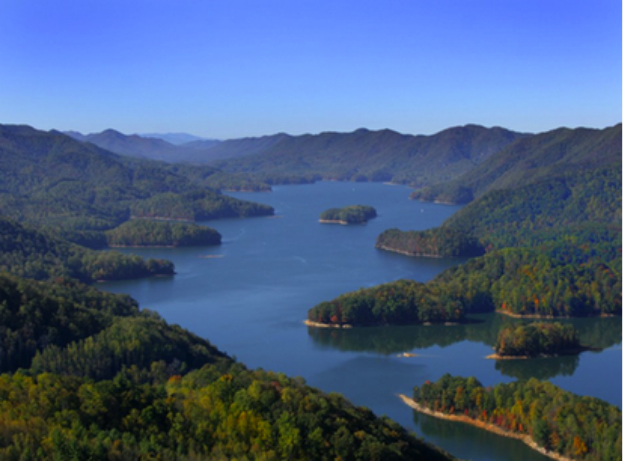 Watauga Lake, nestled in the Appalachian Mountains and the Cherokee National Forest, enjoys the most stunningly beautiful lake and mountain views in the ‘Volunteer State’. Started in 1942 and finally dammed on the last day of 1948, Watauga Lake is the TVA’s highest-elevated reservoir in Tennessee. 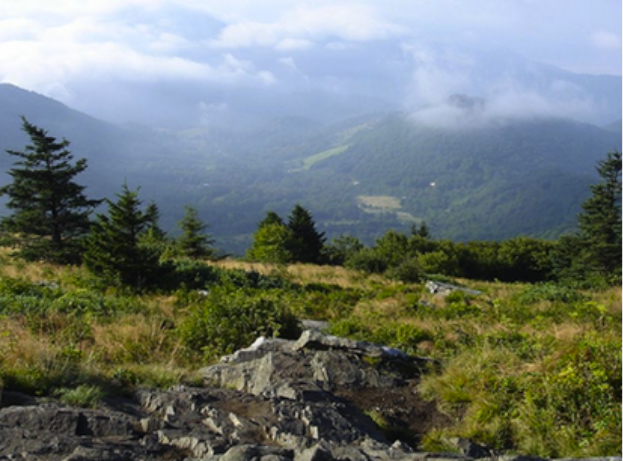 Roan Mountain State Park encompasses 2,006 acres of southern Appalachian forest at the base of 6,285-foot Roan Mountain. Park elevation ranges from 3,000 feet in the valley to around 3,700 feet on surrounding ridges. Rich hardwood forests allow for a great diversity of life and a wide range of outdoor activities. Doe River bisects the park and provides a healthy environment for legendary trout fishing. 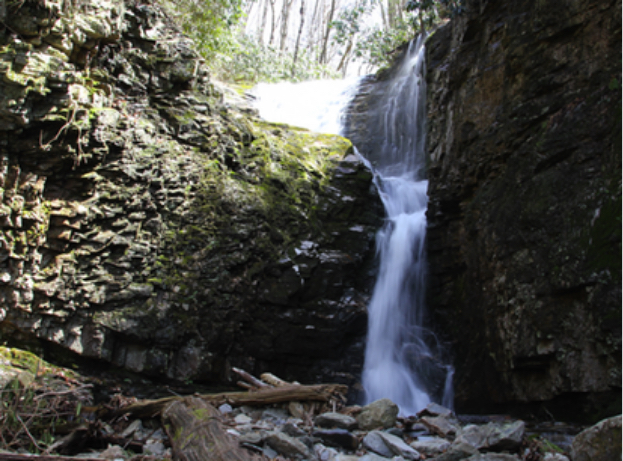 Located in the Southern Appalachian Mountains of east Tennessee, the Cherokee National Forest is divided into northern and southern sections by the Great Smoky Mountains National Park. The 650,000-acre forest is the largest tract of public land in Tennessee and adjoins other national forests in Virginia, North Carolina and Georgia.

For More Information About
Northeast Tennessee and the Region Visit